On Saturday, January 23, we decided it would be a fun opportunity to visit the Fort Langley Historic Site and enjoy the Vive les Voyageurs Festival.  We could watch some of the various events inside the Fort as well as snap a few photos for our Fort Langley Community website.   Once again we were amongst the first into the Fort at 10am.  It’s still January and our $15.70 early bird annual pass has already saved us money. 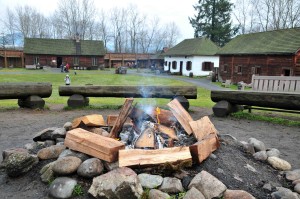 The weather was overcast but not too cold and no rain for the most part.   The giant campfire in the middle of the Fort grounds was plenty welcoming.   In no time at all there were many visitors walking around and we stopped to watch the blacksmith showing interested spectators how it’s done.    With the billows in action, dark brownish-black smoke puffed heartily out of the chimney (so of course, I took a picture of that too).   In the area next to the main blacksmith building, several young children were getting hands on fun learning how to hammer metal into various shapes. 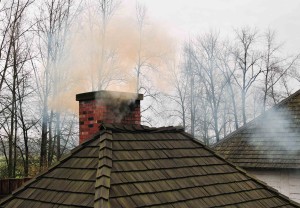 The last time I was in the Fort just a week or so ago, it was a rainy weekday and not a ton of people around but there were a few.   When I visited the Lelem cafe next to the Big House, it was pretty much me and the staff there with the occasional visit by some of the folks who work in the Fort, dressed in period garb.   Today though?  It was packed with every table in use.   In a somewhat inaccurate salute to this particular French-Canadian event, we ordered Poutine.   We managed to get a table and I have to say, that Poutine was really good.    As we looked around in the cafe, everyone seemed happy and in great moods. 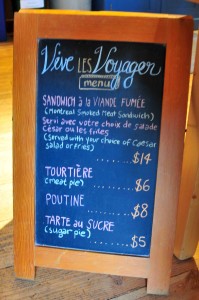 We walked around most of the usual places including hanging around the giant fire eating our maple cookies we bought from the fellow selling maple syrup/sugar goods nearby.    We watched with great interest the gentleman who set up a small stove with an iron pot full of lead and proceeded to melt the lead and pour it manually into a hand-held bullet mold and made a single lead “shot” that back in the day would be used for firing out of flintlock muskets.   That was pretty cool. 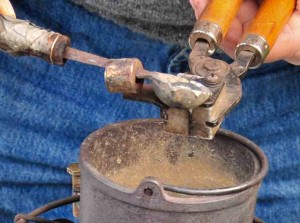 As always, it was an interesting day with a special event in the Fort.   Next up?   Family Day on Feb 6 – 8.  If you want to check out all the Fort Langley and area events, just click HERE.

If you would like to see our short slide show of photos we took that day in the Fort, just click HERE.