A few years ago the residence at Francis & Church was converted into an office for Field & Marten who won recognition for the expert restoration of a building with heritage interest. Part of the building originally was the stable belonging to Langley’s first physician, Dr. Benjamin Marr. In 1924 most of the stable was moved from beside the Marr House to its current location and converted into living quarters by Joe Sailes, a fisherman. A smaller portion of the stable with two horse stalls remained at the Marr House for the pony of the doctor’s young son, Bill. Over the years the Sailes home received additions but the original portion is still identifiable on the south side. The house will be preserved on its new location at Francis and Bartlett St. 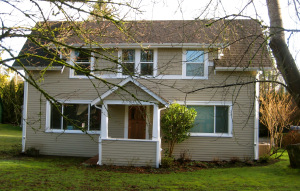 Township Council approved the relocation of the building at 23203 Francis Ave to a new location one block away at Francis and Bartlett. Although the subject building is not a designated heritage building, it has a compelling history and contains some surprising historical elements. Originally a stable that formed part of Dr. B.B. Marr’s estate, the building dates from the period between 1910 and 1913 when the Marr Residence was built on Glover Road. Indications are that just prior to 1918, Dr. Marr’s Barn was divided and the larger half was moved to the northwest corner of Francis and Church where it was subsequently adapted as a residence. The original section of the two-storey barn had a building footprint under 600 sq ft. Its configuration remains evident in the building’s overall massing and was verified as being an integral part of the structure during the restoration and addition work undertaken by Marten and Ruth Van Huizen a couple of years ago to turn the home into an office for Field & Marten. As part of the property sale to Lanstone Homes for eventual redevelopment, the intent was to conserve the residence within the immediate vicinity.